Share on Facebook"Benefits of public transportation: Calling all Montréal commuters" 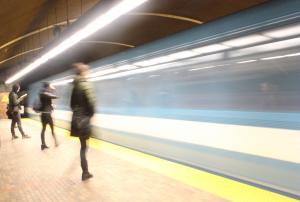 Urban transit first came to Montréal in 1861, when the Montréal City Passenger Railway Company (MCPRC) was created and the first line of horse-drawn tramways began to operate on today’s Notre-Dame Street. At five-cents a ride, taking advantage of the 10 km network was something that only the elite could afford. The population of the Greater Montréal area is now (as of 2011) 3.8 million, more than half of which can be found on the Island of Montréal. Not surprisingly, the only horse-drawn carriages that Montréalers see on a regular basis are those favoured by tourists wishing to fully experience Old Montréal. Today it is much more common to see roads congested with cars, transporting drivers no doubt angered by the seemingly constant construction work that turns streets into dangerous obstacle courses.

Canada has in total around 20 million cars, which perhaps not surprisingly are the largest source of greenhouse gases and other air pollutants. A single car produces an average of three to six tonnes of greenhouse gas emissions per year. According to the 2011 National Household Survey (NHS), roughly 15.4 million Canadians commuted to work and 74% of those commuters drove private vehicles. The percentage of commuters who used public transit for the longest part of their journey was just 12%. Montréal commuters can be congratulated for almost doubling this figure, with 22% using public transport. In switching from commuting alone by car to using existing public transportation (for a 32 km round trip), a single person can reduce their annual CO2 emissions by 4,800 pounds per year, equal to a 10% reduction in all greenhouse gases produced by a typical two-adult, two-car household.

In Montréal the metro system lies at the heart of travel within the central metropolitan area. Inaugurated on October 14th 1966, the Montréal metro now delivers nearly 250 millions trips per year. For transport beyond the Island of Montréal, the commuter train offers six lines that spread as far west as Hudson, as far east as Mont-Saint-Hilaire and as far north as Saint-Jérôme. While most metro riders walk, cycle or use other types of public transit to access the metro, the majority of commuter train riders travel to stations by car. In October 2011, the Agence Métropolitaine de Transport initiated a pilot carpooling project involving electric cars, with charging stations available at three park-and-ride lots. Reducing greenhouse gas emissions from transportation means looking to renewable energy, and in Québec this means hydropower. By 2030, Québec aims to have 95% of trips on its public transit network electric-powered.

According to the 2011 NHS, 83% of commuters travelling by car, truck or van drove alone. In Québec various carpooling options exist that allow commuters to share the use of a vehicle. Many of these services are available online, such as Allo Stop, Amigo Express, Communauto, Carpool, Car2Go, Netlift, PickupPal, RideShark, le Réseau de Covoiturage, ToutMontréal or Kijiji (search for ‘carpool’ ads). The Transports Québec site also allows registered drivers and passengers to find carpooling services tailored to their needs. Carpooling not only reduces carbon footprints, it also provides a fun, social way to reduce the stress of driving and perhaps more importantly saves on fuel costs. According to Transports Québec, in 2009 the average annual vehicle budget for Québec households was $7,542, representing at least 13.2% of their total budget. By significantly reducing the number of cars on the road, carpooling also reduces the need for road construction, repairs and infrastructure costs.

Using public transport can also provide health benefits, for example through walking or cycling to bus stops and metro/train stations. Bike racks are now available on eight Montréal bus lines and bikes are welcome in the front car of metro trains outside of rush-hour. Bikes may also not be allowed on the metro at other times of increased metro traffic, such as during two highly significant events in 2015 - the Montréal Marathon and the One Direction concert. The Société de transport de Montréal is currently trying out new initiatives to encourage bike use, such as a new, safer type of bike shelter at Lionel-Groulx station that can only be opened by registered STM users. Bike slides are also being tested at the Longueuil – Université-de-Sherbrooke and Viau metro stations – although not as fun as they might sound, if you’ve ever feared injuring yourself and all those around you when trying to haul your bike onto a metro escalator, you’ll likely appreciate these clever additions.

Bike sharing is also possible within Montréal, and short commutes can be made via the BIXI network. Consisting of 5,200 sturdy bikes and 460 stations in the Montréal area, the network can be accessed through the purchase of yearly, seasonal or occasional (24 or 72 hour) passes. Recently recovering from a financial crisis, this spring BIXI saw a record number of members sign up for the summer season. These additional riders may have been enticed by the chance to discover flowers, croissants and even magic, seven-speed bikes at BIXI stations. The new BIXI app also allows users to explore Montréal through the eyes of their favourite celebrities. The BIXI season runs from April 15 to November 15, when most bike paths close for winter. For those brave enough to keep cycling on through the ice and snow, bikes can be rented from Fitz and Follwell, Ça Roule Montreal On Wheels and Dyad. Although this might seem like a crazy idea, the non-profit organisation Vélo Quebec estimates that around 50,000 people use their bicycles after the lanes close.

In Montréal, the number of cars is growing more than twice as fast as the population. Although these vehicles might seem like a convenient way in which to traverse the city, they congest our streets and generate pollution and greenhouse gases that impact the health of our population and planet. A number of alternatives exist in Montréal, from electric trains to BIXI bikes. Switching from driving alone to carpooling or to another form of transit reduces the stress of driving on gridlocked roads and allows commuters to embrace their social nature. According to the 2012 Baromètre de la consommation responsable au Québec, more than 31% of Québecers stated that they had shared their car with others over the previous year. With the knowledge that they can single-handedly help Montréal reduce its carbon footprint, let’s hope more and more drivers make the decision to switch to a greener, friendlier form of transit.