Share on Facebook"Biking in the Suburbs. A Green Alternative to Pedestrian and Automotive Travel" 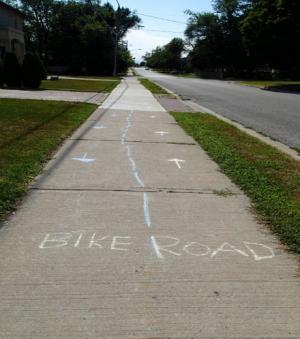 Biking sure is a great way to get around. Sometimes the benefits of the bicycle are apparent, especially when you’re cruising by cars on congested roadways typically encountered in dense city centers. But what about other urban areas that, comparatively, are lower density?

Did you know that globally there are more people living in urban settings than rural settings, with the percent of urban dwellers tipped to grow anywhere between 60 - 80% (depending who you ask) by 2050? These urban environments are, for the most part, not the dense cityscape you would envision. Instead, over half of that population is attributed to the density of suburban settings. Somewhere between the oasis of parking lots, department stores, open space, and seemingly endless blocks of residential dwellings, you have to wonder: what is the best way to move people?

With infrastructure in suburbs widely favouring automobiles, other modes can sometimes be overlooked. In auto dominated neighbourhoods, the natural spread of suburban infrastructure yields the pedestrian nearly useless as a form of transportation. Bikes, however, may be a different case. Where crossing a strip mall or large parking lot on foot may take upwards of 5 minutes, it takes only a fraction of that time on a bicycle. So, to what scale can bicycles benefit suburbs?

Biking can be a convenient way to navigate spread out neighbourhoods relatively quickly while offering a means to escape the melancholic suburban “gas-brake-repeat” routine that can sometimes absorb us, adding plenty of societal benefits. Plus, it’s great for your health and for the environment too.

Did you know that people who live in neighbourhoods with a sound sense of community are more likely to vote, volunteer, have improved psychological health, more friends, and a heightened sense of belonging?1 Progressive suburban communities understand these benefits, so much so that a common vision statement has been to empower pedestrians by creating walkable neighbourhoods. However, for mainstream suburban settings, empowering pedestrians can be a difficult goal to achieve. The good news is cycling can help. Integrating cyclist-friendly initiatives can work as a social stepping-stone to introduce the societal benefits of walkable town centers.

Did you know cyclists are more likely to stop at restaurants, bars, and convenience stores than drivers2? That means residents who cycle will be more likely to support budding mixed-use businesses while being endowed with the perspective to understand the importance of a vibrant town center. Similarly, did you know that regular exercise reduces anxiety, making us more optimistic and social3? This equates to support for local businesses and social, walkable communities.

Supporting cyclist infrastructure would make it more likely for a cultural pedestrian-centered hub to thrive, encouraging the liveliness that suburban dwellers usually visit the city to experience – all the while keeping the convenience and solitude suburb dwellers appreciate. In other words, a sound bike plan encourages the type of growth that empowers everyone.

According to a UK based study, commuters who do not drive (and opt for public transit, cycling, or walking) lose an average of 2lbs, and up to 16lbs when the commute is over 30 minutes4. In the United States, the average commuter cyclist loses around 10lbs in their first year1. With driving being so predominant, it’s no wonder that in the United States and Canada, heart disease, a condition that becomes more frequent with less physical activity, is the leading cause of death by a factor of two5. Providing safe cycling infrastructure may serve as a gateway to promote frequent exercise and better health.

Lastly, what are the environmental benefits of cyclist-friendly suburbs? For every kilometer you travel on a bike that you would travel by car, you are saving approximately 0.2kg of CO2 equivalent*, 6. In Canada, approximately 13 million people live in suburbs7. What if every suburb-dweller rode their bike once a week to a local store, say, within 4km of your home (approximately 15 minute bike ride, each way)? That would equate to a reduction of 1 million tonnes of CO2 equivalent per year**.

But it gets even better. There are also benefits that are more difficult to quantify that come with the societal benefits described above. Carbon emissions would reduce further as local businesses typically use less long-distance shipping. The improved access for pedestrians and cyclists would further encourage more people out of their cars to enjoy their own neighbourhoods and new friends. Encouragingly, local stores require less water pipelines, electricity lines, and roads - all of which works to reduce our ecological footprint.

How’s that for pedal power?

If you liked this post I highly recommend the book Happy City: Transforming Our Lives Through Urban Design by Charles Montgomery. I do encourage you read the entire book, however, chapter 8 in particular discusses transportation mode choices in detail while providing a refreshingly happy spin on things.