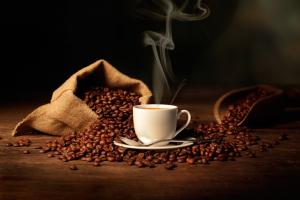 Everyday, millions of Americans start their day off with a nice hot cup of coffee, and oftentimes that once cup can turn to three or four throughout the course of the day. In 2014 Americans on average consumed more than nine pounds of coffee per person, and compared to some European nations that’s not even impressive… But when we add it all up just how much does that one, two, or three cups of coffee everyday affect your personal carbon footprint?

Despite having zero nutritional value, coffee is the third most consumed beverage around the world, behind only water and tea. In 2014 over 150 million 60 kg bags of coffee were consumed worldwide, an increase of 2.5% from the previous year, which was a 2.5% increase from the year before. However, coffee is unique from other major commodities in the aspect that it cannot be grown just anywhere in the world, it is an extremely sensitive plant that is partial to moist, warm, high altitude climates. Nearly all of the world’s consumption of coffee however does not occur in these regions where it grows naturally, which contributes to coffee being the second most highly traded commodity across the globe, second only to oil. With over half a trillion cups of coffee drank every year, the world’s demand for a good cup of coffee is only increasing. But as we continue to become more and more aware of how our personal consumption affects the global ecosystem we should ask ourselves, what affect is my coffee addiction having on global climate change?

As the awareness of global climate change has become more and more of a hot-button issue throughout the past decade, many countries and different industries have looked for ways to mitigate it’s affects and consequences, as well as too limit their own involvement in it’s acceleration. Agriculture has quite a share of responsibility in this regard, as it generates nearly 12% of all global greenhouse gas emissions according to the IPCC. However in today’s highly stratified global economy, it has been a significant challenge for agriculture to de-escalate it’s GHG emissions.

This problem is all the more evident in the coffee industry because of the long and extremely complex supply chain process that is necessary to grow, produce, and ship the coffee bean to market. Multiple different companies and organizations are involved along every step of the way and bags normally go through hundreds of different hands before getting to their final destination. Coffee is almost exclusively grown and produced in the Southern Hemisphere, far from where the consumption occurs; five of the top ten coffee producing countries in the world all are in Central or South America. While 13 of the top 15 coffee consuming cultures are northern European countries, New Zealand being the only country in the southern hemisphere to crack the top 15 for consumption. Interestingly enough America comes in at number 16 in global consumption. Because of the sheer distance from production to it’s final destination there is invariably a ton of carbon emissions associated with the transportation aspect alone. For example, Costa Rica exports approximately 82% of their coffee, about 40% of which must travel by freighter nearly 5000 miles merely to get to port, before it must be transported by truck to another staging area before it finally can be distributed to its final location.

With 112.47 million bags of coffee exported last year alone, Costa Rica is in no way unique in this regard; in fact the numbers associated with Costa Rican coffee production are probably somewhat conservative. Brazil, which produces nearly a third of all the world’s coffee exported 31.2 million bags last year, most of which either came north to America or had to travel more then 5000 miles across the Atlantic Ocean to get to market in Europe. The massive freighters used to ship products over international waters are far from eco-sustainable, consuming more than 16 tons of fuel per hour, which is about 380 tons of fuel per day at sea. These massive engines also run off something called waste oil, which is basically the sludge that is leftover after the refining process to make crude oil, it is so thick that when its cold it is solid enough to walk on. It is the cheapest and by far the most polluting type of oil, and the 90,000 ships that are used for international shipping use up more than 7.29 million barrels of it every single day transporting goods to and from the world’s markets.

Despite the massive distances that coffee must travel to market, despite all the dirty fossil fuels used to power the trucks and freighters to carry it so far, and even despite the local roaster that runs off natural gas to turn the green coffee into drinkable roasted coffee beans, not of these different aspects of the supply chain are the ones having the biggest impact on coffee’s carbon footprint. No, it is at the final stage of coffees journey that becomes the most problematic, the final transition into the cup at the café that generates as much as 50% of all carbon emissions of the supply train.

This might seem surprising at first, but when it’s broken down it makes a little more sense. In the study of Costa Rican coffee we looked at earlier researchers discovered that less than 1/4th of the carbon footprint from coffee comes from the farm. This is because in the rural mountains where coffee is overwhelmingly produced, they do not have huge industrial plants with machines to help, most of the energy expended is human labor, the majority of coffee grown in Latin America is planted, picked, sorted and processed by hand. The few machines they have are small man powered de pulping machines or other small devices that don’t use up a significant amount of energy. As I’ve already discussed most of the energy expenditures on the production side of things come from the transportation of the beans, by truck and then out of the country by freighter ship. Depending on the size of the farm and the processes used one pound of coffee can create up too 4 pounds of carbon emissions before it even leaves the country. About 2 pounds of which come from the farm, about 1.25 from the mill and than another .75 lbs. in preparing the goods to ship.

The roastery is where the green coffee beans go once they are off the ship to be roasted and turned into the aromatic drinkable beans we know and love. Now every roaster has different techniques, but for the most part they all rely on fairly similar machines. These roasting machines are primarily run off natural gas that is not efficient at all. Adding to this, unlike the farm or mill, most roasters are going full speed all year round, they do not have the luxury of different seasons affecting their business. According to several studies it’s determined that on average the roasting stage of coffee’s life contributes approximately 15% of the overall footprint, or about 1.2 pounds of carbon emissions.

So far between the farm, the mill, transportation, and the roasters our single pound of coffee beans has accrued nearly 5.5 pounds of carbon emissions. Yet now that our beans have reached their final destination, the local café, that number is about to climb dramatically. The café is by far the most energy intensive stage of the entire supply chain, and this is a result of a number of different factors: Most cafes run from early in the morning till late in the evening, and thus their immense number of electronics and machines are running all day long. The incredible number of different machines and gizmos that are needed in a café all use an immense amount of energy. The blenders, grinders, toasters, brewers, refrigerators, freezers, espresso machines, cash register etc. all of these different appliances are constantly draining energy, and that’s not even counting all the electricity being consumed at the front end of the store between all the phones and computers being charged to simply keeping the lights and air conditioning going. All of these different elements combine to form the single biggest influencer upon coffees carbon footprint.

Well that sounds like a lot. It is, but don’t let that guilt sneak up on you just yet. If you are like many other people and brew the majority of your own coffee at home, that number is significantly lower. In fact, depending on your personal preferences for how you like your coffee, a single pound can yield as many as 40 8 oz. cups of brew. So if we know that one pound of coffee produces about 11 pounds of carbon emissions, we can divide that by 40 to understand just how much carbon is coming from our first cup every morning. This comes out to approximately .275, or about a quarter a pound of CO2 is produced for every cup we drink.

If this article has really turned you off to the idea of drinking coffee on a regular basis, no worries you are not completely out of luck when it comes to your morning caffeine fix. Of course, the first option is always tea. As the second most consumed beverage in the world there are more tea drinkers than coffee, and it can be a splendid replacement, both economically as well as health wise, tea offers many benefits while still having that kick of caffeine is you so choose. If it is the specific flavor and aroma of coffee that you love in particular, there are a number of herbal coffee substitutes that have been gaining popularity as of late. One of these is Chicory Root coffee. Made by simply roasting the Chicory root, this has been cultivated in Europe for ages as a replacement for coffee. Conveniently you can also grow this root right in your own garden, so it costs virtually nothing. Along with many health benefits the Chicory root is one of the most promising coffee substitutes in my eyes. Along with the Chicory root there is an extensive list of different herbal blends and roasts that are popular all over the world as substitutes for coffee, many of these herbal blends have multitudes of health benefits and some of them you can grow in your own backyard. If you feel like making a difference in reducing your carbon footprint and are open to a potential change in your consumption habits, take a few moments to do a quick Internet search of coffee substitutes, I promise you’ll feel better about making a change that positively affects the earth, and who knows, you might just find a new drink you love even more.

Carbon Footprint Across the Coffee Supply Chain: The Case of Costa Rican Coffee. (2012)