Share on Facebook"Going by plane? Here are 5 tips to help reduce your carbon footprint" 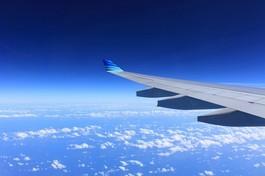 In 2013, domestic commercial flights accounted for 6.4% of US travel-related greenhouse gas emissions, making it the fourth-largest source of CO2 emissions in the transportation sector.1

The airline industry has evolved considerably since its beginnings. New fuel-efficient aircrafts as well as greener airports have contributed to the improvement of air travel efficiency by 20% since 2000, saving U.S. airlines $33 billion on fuel and preventing 303.9 million tons of CO2 from being released into the atmosphere.2 Despite this significant progress, it is often recommended to choose an alternative to flying, as individual trips by air have a remarkably large carbon footprint.

Before traveling, it is necessary to consider the reasons for your trip and opt for the most sustainable way of transport. For unavoidable flights, here are some tips that will help you to reduce your carbon footprint:

Sustainable travel is all about planning your journey beforehand so as to find the greenest flight, but you should not forget simpler tips after having booked your ticket! For instance, take public transportation to and from the airport. Try to limit your luggage when flying, as the heavier the plane, the more fuel it burns and the more greenhouse gases it releases. Moreover, use electronic tickets instead of printing your boarding pass and avoid charging your electronic devices (phone, computer…) while on the plane, as they consume large amounts of electricity. It is also better to use the bathroom in the airport and not in the plane. The fuel used for a single flush could run a car for six miles.5 Air travelers can truly make a difference with simple efforts to reduce the global warming impact of each flight.