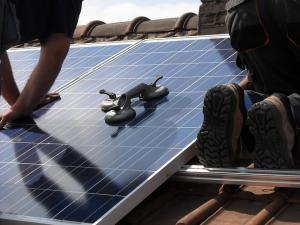 Over the last five years, the United States has experienced a tremendous increase in the usage of solar energy as an alternative renewable energy resource. In 2013, the number of solar installations increased by 42% from 2012 and comprised 29% of all new electrical installations, an increase from the 10% reported in 2012 by the Solar Energy Industries Association (SEIA). The years preceding continued the trend as 2015 saw a 30% increase from 2014 and an additional $18 billion invested into solar energy technology. The future of solar energy use shows no sign of slowing in popularity as the overall attractiveness of saving money on home utility costs with consistently low fixed rates, reducing the national carbon footprint and having a renewable resource that can be produced and maintained within the United States while creating more jobs, stimulating the national economy and reducing the reliance on foreign countries for energy remains high in the American consciousness.

The popularity of singular household-powering solar panel systems has particularly grown increasingly each year. This is due to the fact that solar energy is becoming an increasingly more reliable way of saving money in the long run on utility costs. Currently, it is projected that families will save tens of thousands of dollars by switching to solar panels as their primary home energy source. As standard energy costs rise in the upcoming years it is possible that in the best-case (or worst-case, depending on who you ask) scenario in the sunniest states, hundreds of thousands of dollars in savings is possible. In California, the cost of standard natural gas power electrical systems is rising at an alarming rate as environmental regulations have led to the decommissioning of numerous coal-burning power plants. This old reliance on coal has led to a new strain on electrical other electrical power plants trying to keep up with the demand resulting in blackouts, inefficiencies and the growing price increase of standard utilities in households. Similar trends are now occurring throughout the rest of the country.

These struggles within the standard electrical industry have led many US residents to make the switch to solar power. The unreliability of standard electricity has led to an unstable market where prices are dropping and, more often, climbing at a rate comparable to that of the volatile natural gas market. Solar panel installation companies are offering homeowners who are overpaying for electricity an attractive alternative. As electricity costs rise, homeowners can capitalize and save money by locking a fixed rate from solar powered utilities. This concept states that one will save greatly on utilities costs in the long run which more than repays original installation costs and maintenance. Though it is almost impossible to give an accurate estimate of the overall savings offered by solar energy due the high variation of effectiveness across the United States and the wide range of uniqueness of individual homes and of individual energy consumption, conservative averages tend to fall within the range of $20,000-$60,000 in overall utility savings per home. With utility prices expected to grow over the next upcoming years and decades, solar energy provides the homeowners the stability of a flat rate that doesn’t fluctuate. With the average life expectancy of a solar panel installation consistently estimated to be between 25-30 years, the ability to lock down a lower utility rate over the next three decades offers peace of mind to homeowners that go solar.

Monetarily, the savings will only continue. The chart above shows the projected savings of solar energy using households per kilowatt hour assuming a worst case scenario of tax credits and more conservative estimate of a 20 year panel lifespan. It shows that residents of 36 out of the 50 states would save money from solar energy at a rate of $0.01-$0.10 per kilowatt hour in 2016. This could soon include all 50 states as the science develops and the cost of transporting solar energy to areas that currently benefit less from solar energy becomes cheaper. In the best case scenario, a household that uses 10,000 kilowatt-hours annually would save roughly $1,000 annually, though it must be noted that this estimate is very speculative. Additionally, solar panel systems do not affect property taxes, and, in fact, solar homes are sold 20% quicker than homes without solar panel installations. In California, where solar energy is more profitable than in 49 other states (Hawaii being the exception), the resale value of homes with solar panel installations are $5,000 higher per kilowatt of solar electricity. Though admittedly these effects will always vary from home to home, companies selling solar panels will normally offer a quote into how much solar energy will benefit the savings of the individual household.

As solar energy technology advances rapidly, the price of obtaining and maintaining solar panels will almost certainly decrease. Critics of solar energy often cite the expense of the installation and maintenance of solar panels as a proof of a dangerous investment. However in the long term, after a couple of years, the combined amount of years using solar energy will more than reimburse the initial costs of installation. Additionally, the cost of solar panels has decreased by 100% since the late seventies, and 50% of that decrease had occurred in the last 10 years alone. Currently, the price of installation on an average home can average to cost around $15,000. If the improvement of solar panel technology continues at its current pace, it is likely that the current mean price will surely drop. Another factor that could lead to more affordable solar energy options is the growth of the commercial market of solar panels. Currently, there is a boom within the renewable energy where more private solar panel companies are flooding the market offering affordable options to clients ranging from large corporations to individual families. Turning on the television in the morning, it would be easy to find informational commercials from solar panel companies trying to sell their product to homeowners. Even major enterprises such as Mercedes-Benz and Tesla are looking into selling solar parts within this newly profitable market. Ideally, the competitive competition amongst companies of all sizes selling solar panels and parts will continue to push the scientific development to develop more efficient solar products, and the competition will encourage these companies to sell their products at cheaper rates. If this happens, solar energy will become more affordable for lower-income families, making solar energy the cheaper option than standard electricity in the years to come. Many are predicting that solar energy will be the most popular form of renewable energy throughout the duration of the 21st century.

Though solar energy is in itself known as a “zero-emission” resource, skeptics often argue that the production of solar panels original installation create larger amounts of carbon emissions and rule out the overall carbon footprint reduction of solar energy. However, as the carbon payback shows to far more environmentally friendly and as time progresses, solar panels show to be crucially friendly to the threat of climate change with a superbly low carbon footprint as as “zero-emissions” renewable energy apparatus. The U.S. Department of Energy stated in 2004 that, in a state like California, it would take about 3.5 years for a standard solar panel unit to “payback” its carbon emissions from its original production. Under that statistic, a solar panel lasting 25-30 years would only spend 10-15% of its lifespan repaying the original production outputs. Additionally the tremendous increase in expertise over the last 15 years especially have led to far more efficient solar products. Thus the 3.5 year statistic from 2004 would, in reality, be much quicker concerning solar’s carbon payback in 2016. The chart above demonstrates the extremely low carbon footprint left behind by solar panels in comparison to other sources of energy, renewable and nonrenewable alike.

As it has been pointed out multiple times, “going solar” can have many individual financial benefits. However it is important not to forget how beneficial solar energy can be for the environment in terms of reducing CO2 emissions. Because solar panels are a “zero-emission” product, there are little to no CO2 emissions produced by silicon solar panels. Considering the rough estimate of CO2 emitted by a standard household using 11,000 kilowatt-hours annually , homes using solar panels would save roughly 16,000 pounds of C02 annually which would save about 24 trees from having to offset the emissions per year. In 2007, the US Census Bureau reported that there were 111,162,259 households in the United States. If 5% or 5.5 million of those households relied on solar panels, 89,600,000 pounds of CO2 would not be emitted resulting in preventing roughly 7 million trees from having to offset the carbon emissions. Thus the effect of solar energy in just a small percentage of households would have a tremendous impact on the national carbon footprint.

The future of solar energy in the United States looks bright. It is becoming more popular every year to make strides towards an eco-friendly society. For many years, the idea of being eco-friendly and moving away from fossil fuels towards renewable energy remained only a discussion. However over the last decade, eco-friendly products in general have increased in popularity, more industries, namely the automotive, are ditching fossil fuels and nonrenewable energy in favor of clean renewable energy, and the United States government has lately been more involved in passing legislation that better regulates the national output of pollutants and pushing an agenda that recognizes climate change as a legitimate threat. There is an overall more involved attitude towards preserving the environment in the United States than there ever has been in the past. As this trend continues to cultivate within American society, the attractiveness and popularity of renewable resources, particularly solar energy, is destined to grow exponentially.

If you would personally like to consider having solar panels installed in your home, happily there are many options. Personal solar energy will have varied effects depending on varying factors from the region in which your home is located to, to the type and angle of your roof and especially your annual energy intake among many other factors will determine how much you can save on your home energy bills. Most solar panel companies offer free quotes to there services. One popular company in the United States that offers such services is Sunrun. They have many useful tips regarding how much your home could benefit from solar energy. If interested in seeing how solar panels can have a positive effect on your home, you can visit their website at www.sunrun.com. A similar company to Sunrun in Canada would be HESPV and can be found at hespv.ca. Savings can vary at a very wide range but it would be more than worth your time to see if it can help you.