Share on Facebook"How green is the future of self-driving cars?" 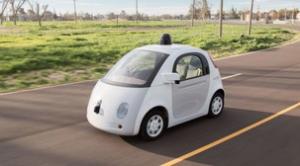 Experts predict self-driving cars will make up 75% of vehicles on the road by 2040. Research has been around for more than 40 years, but the concept is now within reach as executives at top companies such as Google, Tesla Motors, and Mercedes-Benz, amongst many others, plan to launch self-driving cars by 2020.

Currently transportation accounts for about 26% of total US greenhouse gas emissions, the second largest contributor after Electricity. With a wave of driverless vehicles imminent, the big questions is: Will these cars reduce or increase emissions?

“If you have a fully autonomous car that talks to other cars and traffic signals, then it can drive more smoothly, much better than a human can, and there will be fuel economy benefits coming out of that.”

The assumption is that by eliminating congestion, driving will be more efficient, thus reducing carbon emissions. These cars are designed with image-capturing technologies, allowing the vehicle to scan the surrounding environment to make good driving decisions, which seems to be the main focus of the production of these vehicles - not an environmental focus.

“Google is working on self-driving cars, and they seem to work. People are so bad at driving cars that computers don’t have to be that good to be much better.”

However, car-makers are still working on the promise of environmental benefits. These vehicles have advanced sensors and software to maximize efficiency (less breaking and unnecessary acceleration), traffic data to obtain the best route, and can minimize extra driving when looking for parking - all these factors help these cars in achieving a greater fuel economy and in eliminating extra emissions from inefficiency that would otherwise be caused from human drivers.

In addition, these cars would shift away from individual car ownership to shared transport, reducing the number of wheels out on the road. Driving in a tight formation could reduce energy consumption up to 25%, but surprisingly, reducing congestion is predicted to only cut up to 4% of energy use.

These cars also have great potential to save lives. According to the US Department of Transportation, 94% of road accidents occur due to human error. That being said, driverless technology could drastically lower deaths and injuries that occur every year. The Atlantic reports that automated cars could save up to 30,000 lives per year in the United States.

On the opposite side however, new studies show that by making driving easier and more convenient, it will make us rely on them more, actually negating any environmental benefits.  For example, the cars will allow greater mobility for some groups of people. Particularly, allowing the elderly and people with disabilities to ride, energy consumption is predicted to increase by 2-10%. This service as well would be appealing to those without licenses, including the population of all those who are underage to obtain a driver’s license.

Carbon emissions also depend on the demand for this type of travel. Although energy efficiency will be improved and carbon emissions of individual vehicles reduced, the overall impact and bigger picture depends on how many people will use them.

Consider this scenario: Huge numbers of people could switch to self-driving cars from public transportation. Self-driving cars offer privacy and convenience in addition to having the ability to concentrate on other things such as reading or getting work done along the way. This is so appealing that experts predict driverless cars could increase car travel by up to 60% in the United States.

An increase in driverless car travel and motion of these cars also means that they would have a poorer lifespan, needing to be replaced more frequently.  Lifespans are predicted to decrease to 3-5 years rather than their current 11 years, from the frequency in usage of these types of cars.

Driverless cars have potential to save lives, but it does not eliminate the potential for accidents. Google has said that there have been more than a dozen accidents with their cars since the self-driving car project began, however, it is claimed that these accidents were caused by human error. Google has also said that human drivers were able to prevent the autonomous vehicles from causing an accident around 13 times.

“The greatest challenge to having highly automated vehicles is not technological; it’s handling the transition when humans must take back control of the vehicle.”

Richard Wallace, Director at the Center for Automotive Research

In addition, urban sprawl has the potential to expand. Most people prefer to keep their commutes under an hour. However, driverless cars are appealing because they have the potential to offer quick and efficient transportation, resulting in people spreading out into suburbs. Thus, it is possible that there may be greater environmental implications than just carbon emissions.

What about human intuition? People have an intuitive way of guessing what other drivers will do. In addition, ethical problems could arise in which machines would struggle to deal with. Faced with a choice between plowing into a group of people or going off a bridge and injuring passengers, what is the system programmed to do? Will the vehicle swerve to avoid animals suddenly crossing the road or will it always prioritize the safety of its passengers?

There is great potential in environmental benefits, however, the benefits of these cars will depend on how, and how much we decide to use them. There are also many questions and concerns. What happens if there is a computer malfunction or minor glitch? If the car crashes whose fault is it? How will they operate in extreme weather conditions? Will people’s proficiency and driving skills diminish? How would road infrastructure, traffic and street lights be altered?

Is the end of driving soon? It is premature to conclude that self-driving cars will in fact be better for society and for the environment. So until developers are able to understand drawbacks and successfully design for them, we should continue to practice safe and efficient driving.

By following these smarter driving tips you can cut your carbon emissions by up to 8% - this is equivalent to annual fuel savings of up to one month!