Share on Facebook"How much can composting help to reduce my carbon footprint?" 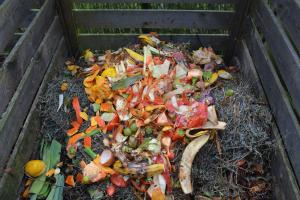 Food waste represents 21.1% of the trash produced in the US even after recycling and composting are taken into account [1]. While reducing food waste is a great way to reduce your environmental impact, even the most careful households will still produce food scraps like egg shells, banana peels, and tea bags. The good news is that these and many other types of food waste are compostable, and you may be surprised by how much composting can help fight climate change. The environmental impact is due to both decreased fossil fuel consumption from waste transportation and the reduction of greenhouse gases produced as the food decomposes in a landfill.

It is estimated that American families produce an average of 20 pounds of food waste per month [2]. If not composted, all of this waste has to be transported from individual homes to landfills. This is a very inefficient process for several reasons. In cities, garbage trucks only get about three miles per gallon because they spend expend a lot of energy starting and stopping as they move from house to house [3]. Furthermore, garbage typically has to be transported over large distances before it reaches a landfill. Although exactly how far varies widely from place to place, this can be as far as 500 miles for some cities [4]. Transporting food waste this far is very inefficient since it can be responsibly handled locally.

Once the food waste reaches the landfill, it produces greenhouse gases that it would not produce if composted. This is because the chemical reactions that turn composting food into a wonderful garden nutrient take place in the presence of oxygen. By contrast, landfills seal garbage in airtight enclosures. Although this prevents toxins from leaching into groundwater, it also means that food waste decomposes anaerobically, producing a gas mixture that is approximately 50 percent methane and 50 percent carbon dioxide [5]. Both of these are greenhouse gases, but since methane is more efficient at trapping radiation, it contributes 25 times more to global warming than carbon dioxide per pound [6]. Mainly because of the anaerobic decay in landfills, it is estimated that every pound of food thrown away results in 3.8 pounds of greenhouse gas emissions [7].

One simple solution to the landfill emission problem is to compost your food waste at home. There are many great resources on the internet that can help you start composting [8]. Even if you live in an apartment building, you may be able to find community composting programs in your neighborhood. You can also try to implement a composting program at your workplace and support local restaurants that compost their food scraps. Finally, share what you’ve learned about composting with your family and friends. Many people view food waste as environmentally harmless (because it is biodegradable) without realizing how much it contributes to their own greenhouse gas footprints. By encouraging people to handle their food waste responsibly and doing the same, you can help fight climate change on a daily basis.