Share on Facebook"Pacific garbage patch: 6 effortless ways you can make a difference" 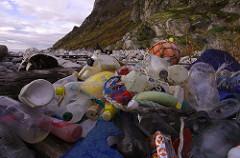 The Great Pacific garbage patch is caused by marine debris – the human-made waste that ends up in the ocean. The animals and plants living in the ocean are increasingly more threatened by our waste. Most of this waste (around 60 percent) is estimated to be plastic, but also includes Styrofoam, synthetics, metal, foam and glass. These are not biodegradable materials, and as such remain and cause problems both for the species living in the ocean and the humans who live alongside them. The result is a serious amount of pollution which is very difficult to clean. However, thankfully, there are easy ways to help reduce your own impact and make a difference.

Pacific garbage patch: What can I do?

Even though the issue of marine debris is obviously an ongoing effort, changing behaviors is an important part of addressing the problem. There are small changes anyone can make to reduce their impact:

Pacific garbage patch: What is marine debris and why is it a problem?

The organization SeaWeb defines marine debris as “human-derived solid waste…lost, discarded or discharged daily into oceanic and coastal environments or reaches the sea through waterways and other land- based sources.” Between 60 and 80 percent of this debris is estimated to be plastic – according to the UN, “between 22 percent and 43 percent of the plastic used worldwide is disposed of in landfills.” From there, the debris reaches communities. Plastic breaks down very slowly over time. The exact rate is uncertain, but the decomposition of plastic has been estimated to take anywhere from 500 to 1000 years. Even decomposed plastics, however, can be dangerous, as they leak chemicals when they break down; these pollutants are then consumed by marine animals, which may pass them on to humans. In a study done in Lake Erie, 85 percent of the plastic particles were “smaller than two-tenths of an inch.” In 2010, it was estimated that eight million metric tons of plastic were added to the ocean.

Plastic production and waste also has a serious effect on the carbon footprint that we leave behind. A carbon footprint is “the total amount of greenhouse gases produced to directly and indirectly support human activities, usually expressed in equivalent tons of carbon dioxide (CO2).” CO2, or carbon dioxide, is a “greenhouse gas” – it is not absorbed and remains in the atmosphere, trapping heat and contributing to global warming. The carbon footprint of 1 kg of plastic is 6 kgs of CO2 – meaning that 6 kgs of CO2 are released with every kg of plastic produced. According to the Worldwatch Institute, the average person in North America and Western Europe consumed about 100 kg of plastic a year in 2015. This means that each person’s carbon footprint was 600kg – and if a household is on average at least 2.5 people, as it was in the United States, that means that each household emitted 1500 kg of CO2 solely from plastic use; to go farther, in 2014 in the US, there were 116,211,092 households: if each releases 1500 kg of CO2, this yields 174,316,638,000 kg of CO2 – again, solely based on plastic use. This is only one example. There are many calculators you can use online to figure out your own impact: here, here, and here are just a few.

Pacific garbage patch: Who is affected by marine debris?

The entire food chain is affected by marine debris. Algae and plankton, which rely on sunlight to survive, may not be able to subsist if plastic debris clogs the ocean and prevents sunlight from reaching them. Coral reefs are similarly affected by the presence of debris, which can damage them. The animals who survive on or by eating these organisms will be affected, as well as the predators who feed on those animals. Animals can also accidentally eat the debris that gets put into the ocean, mistaking it for food – this can seriously injure or kill them. Humans themselves can be injured or harmed by debris such as fishing nets, glass or metal if they are in the water or on the beach, or if they eat animals who have consumed toxic chemicals from broken-down debris.

Pacific garbage patch: What is being done?

There is an International Convention for the Prevention of Pollution from Ships (MARPOL), which is intended to prohibit “all overboard disposal of plastics and limit other discharges.” The issue of marine pollution is obviously a global problem, which requires a global response – no one country could take on the task due to its difficulty and the funding required. This means that organizations such as Plastic Pollution Coalition, Stop Plastic Pollution and One World One Ocean become valuable in their attempt to bring together individuals, businesses and policymakers to work towards a solution. Additionally, states such as Virginia have enacted specific policy outlines and detailed action plans. The Virginia Marine Debris Reduction Plan, devised by “representatives from government agencies (federal, state, and local), academia, nonprofit organizations, businesses, experts in marine debris issues, and other[s],” documented the most prominent sources of marine debris in 2013– ranked second after cigarette butts were plastic bottles (not surprising, as Americans throw away 35 million bottles a year). The emphasis of the plan was an encouragement of collaboration among different sectors and changing behaviors that led to increases in marine debris, such as discouraging littering and encouraging recycling and the use of reusable bags. This one plan for one state in a large country required an immense amount of coordination, planning and detailed research, demonstrating the challenges of addressing an issue of this scale.

The problem of marine debris and the Pacific garbage patch is a serious one, and it must be the responsibility of every person to be conscientious about their effects on the environment. Although it is easy not to think of the ocean and the Pacific garbage patch itself, miles away for most people, the effects of what we throw away stay with us, whether through the seafood we consume, the changes in the ecosystem, and the effect on our own ability to enjoy nature and appreciate marine animals. It may take a long time to coordinate efforts to resolve the debris problem; in the meantime, small changes in behavior and thinking about ways to consume less wastefully can have great effect.

So, think about your own consumption and what changes you can make to help the problem of marine debris and the Pacific garbage patch. Reducing your impact does not have to be painful; What’s Your Impact’s EcoGuide shows many different ways that you can save time and money while being environmentally conscious. Every little bit can help.