Share on Facebook"Téo Taxi: An electric revolution for Montreal's taxis" 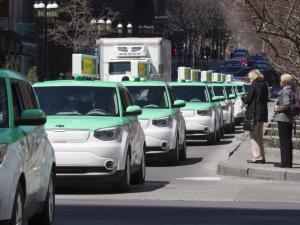 If you reside in the city of Montreal, you may have noticed those intriguing green and white cars from Téo taxi driving up and down the metropolitan area. It is with excitement that business man Alexandre Taillefer’s new Téo Taxi project has come to life. Téo stands for Transport Écologique Optimisé, or Optimized Green Transportation, fitting the main purpose of the business venture. The idea is originally created in order to present an ecological alternative to taxis, and provide a better working climate in the industry. Since then, Téo Taxi has become an innovative concept that contributes to Montreal’s environment, in future reduction of greenhouse gas (GHG). In fact, the company provides taxi services aboard 100% electric cars. Those currently include three models, such as:

As of November 2015, 50 cars have been circulating for trials. Since most of used electric cars have an autonomy range from 150km to 400km (for tesla), only the central area of the city benefits from Téo’s services at the moment. The following image shows the zones in which you can enjoy a Téo Taxi.

Not only this new company is innovative in its ecofriendly services, but it also provides an ethical workplace environment: The new taxi company provides a fair pay to their certified drivers, meaning that salary would start at 15$/h. This prevents the drivers from working longer hours, and from being in a hurry that they become dangerous to others.

In order to benefit from the services, a mobile application available Apple or Android app store can be downloaded. It allows you to indicate your location and pay the ride with one touch. Similar to Über, transactions are mainly done by credit card, which you register with your account. The transfers are completed after your taxi ride. Since the company provides a fair salary to their employees, tips are also automatically included in the bill at a rate of 15%, which can be adjusted until the end of your ride. In order to accommodate you in the experience, the cars also provide a free Wi-Fi.

The emission of greenhouse gas is still a problem that is widely spread in the country. According to CBC News, the province of Québec represents 11.2% of the country’s total GHG in 2013. The agglomeration of Montreal inhabits a population of 1, 97 Million people, nearly a quarter of the Québec province population. Although the city is known for its public transit and active transportation systems (i.e bicycle), the use of personal vehicle remains the main mode of transportation in the agglomeration. Indeed, 31% of transportation movement is made by using public transit and 14% using active transportation, leaving 52% of inhabitants using automobiles. According to the city of Montreal, in 2009, 33% of the contribution of GHG is made by road transportation. This means that around 17% of automobile use contributes to greenhouse gases.

In order to improve the environmental conditions in the city, Montreal has a plan in which it aims to reduce 30% GHG emission in Montreal’s activities by 2020 compared to 1990. According to this plan, the proportion of vehicle per household intends to decrease from 0.84 vehicle/household to 0.79 vehicle/household. A great way to reduce this number is to promote carpooling and taxi services. Also, the city of Montreal recommends the use of electrical transportation as a way to reduce polluting emissions.

How does a taxi business contribute to GHG in Montreal?

When you think about it, 4,437 taxi cars circulate across the metropolitan area at any moment of the day. They are also responsible for 2.3% of GHG emitted in road transportation. Their constant movements throughout the city make you realize their great impact on the environment, and CO2 emissions, even though their numbers are small.

Impact of Téo Taxi in Montreal

Whenever you are in need of a taxi, Téo Taxi provides a way of commuting in a greener way. With Téo, you contribute in the circulation of electric taxis in Montreal. This could eventually lead to the extinction of fuel-based cars. Even though the price range is not cheaper than competitors, you are assured to be part of an ethical and fair company that provides positive working environment and fair salary.

Here are some facts: According to a 2011 study in the taxi transportation industry demand in Montreal, a driver gives approximately 6,000 rides each year, with an average ride distance of 10km. This same average distance represents an emission of 3 to 4kg of CO2. According to The Climate Protection Partnership, a single person should emit a maximum of 2t of CO2 as an individual contribution to reduce its carbon footprint. This same amount of emission is also the equivalent of a 500km car ride. If you are a taxi user, this also translates to an average of 50 taxi rides. The innovation of Téo, as well as other electrical taxi around the world allows you to save this wasted energy. Téo has just started with a certain amount of electric cars as prototypes. At least 24.24t of CO2 can be spared each year per car. Also, if you tend to take the taxi twice a week during a year, Téo taxi can make you save around 420kg of CO2 each year, all thanks to 100% electric cars. Thus, by using Taillefer’s innovative project, you contribute in great GHG savings in Montreal and to the reduction of your carbon footprint. Imagine how beneficial this will be once more cars will be added into Taillefer’s project!

If you are not a usual taxi customer, the concept itself contributes to an evolution and modernization of taxi business in Montreal. Again, all Téo cars provided to the drivers are 100% electric. Also, as of May 2016, 60 cars are able to be driven in the defined areas. Considering the number is small, and the territory is restricted, Taillefer has revealed in November 2015 to plan on replacing and accommodate half of Montreal’s taxi cars into electric ones in the next four years. With 2,250 taxi cars awaiting transition into electric ones by 2019, Taillefer’s concept would help the city’s plan to reduce GHG on a long term, and wipe the 2.3% accountable emission by taxi cars. This changing amount remains small, but it leaves a positive mark in the hope of making Montreal a better city.

A few days ago, I have had a conversation about Téo Taxi with three friends living on the South Shore of Montreal. Two think the idea is innovative. One of them believes it is a good initiative to make people more aware about the environment. She has also mentioned that the colors are useful to attract Montrealers’ attention and to make them conscious about this taxi alternative. On the other hand, both agree that as students living on the other side of Montreal, Téo Taxi is not part of their option due to the lack of price competition with other taxi companies, and with its restricted service zone. The revolutionary concept may be starting, but it offers services accessible for a small customer base. The third person with whom I discussed also thinks that Téo Taxi is a good option for the environment. He mentioned his experience to be pleasant in regards to the driver’s politeness, and the comfort of the cars.

Likewise, if the company decides to enlarge its zone limits, this will allow Téo Taxi to expand its impact on the metropolitan region and make electric cars more accessible, thus contributing to the reduction of CO2.

In the meantime, if you require taxi services outside of Téo Taxi’s zone, other alternatives to the reduction of GHG are available to you.

As previously stated, the city of Montreal plans on to reduce the number of vehicles per household as an objective to reduce the GHG emission by 2020. In addition of taxi use, it also suggests car sharing. This option allows people to rent a car at a low cost for brief use. If you look for accurate services of car sharing, here are two options in Montreal:

In addition, the option of carpooling is also safe when using appropriate sites. In this case:

These taxi alternatives give you the opportunity to have an impact in long distance movements. Nonetheless, an innovation such as Téo Taxi remains more important in the improvement of the environment since it’s more ecologic.

Apparently, the implantation of electric taxi is not only found in Montreal. In fact, it has been announced on Nissan’s USA official website in September 2013 that Barcelona is part of the implantation project of using 100% electric vehicles in transportation. Within a year later, the system has developed in Spanish capital Madrid, along as in Rome, Italy. Back on the American continent, Mexico City has also implanted 88 electric cars in early 2013 for testings. Mexico City taxi driver Cristóbal Reynoso has mentioned to the website hybridcars.com that the responses to this concept are positive. All to say that by exchanging ordinary taxi cars with 100% electric vehicles, air pollution is less harming, meaning that it would have benefit impact in the future of GHG.

Considering this project is new in Montreal and still ongoing its 18 months trials, no statistical results are diffused yet. Despite searches around the subject, there are no specific previsions that mention future greenhouse gas reduction regarding Téo Taxi. Indeed, more sources claim benefits of electric taxis in regards to the reduction of GHG. However, according to an article in the Québec Electric Vehicle Association, Montreal encourages taxi drivers to replace their cars with electric or hybrid vehicles. In the end, it may reduce 25% emissions caused by taxi drivers, and make them save $19,000 in fuel each year.

In the end, Alexandre Taillefer’s Téo Taxi brings a revolution in the taxi industry of Montreal. Despite the idea is already implanted in other parts of the world, the business man’s company also gives the opportunity for its drivers to obtain a fair salary, and allows its customers to interact in the vehicles. As it evolves and hopefully expands, and in comparison to Montreal’s 2020 plan, chances are that this idea evolves in the reduction of CO2.

Not to forget, the best part of this project is that you can also contribute by using and encouraging this change.